Cuttlefish Can Watch 3D movies and Wear the Glasses

When tested, subjects showed they have depth perception much like humans. Humans and cuttlefish are similar. How do you ask? They can both watch and react to 3D movies. The scientists studied this by gluing Velcro near their eyeballs, and then sticking on custom-made 3D goggles. It wasn't easy.

"It took a lot of coaxing of the cuttlefish to make them wear their glasses," Trevor Wardill said. "They'll want to play with it." The glasses, similar to ours, had one blue filtered lens and one red filtered lens. Once a cuttlefish got hungry, the scientists showed them 3D videos featuring two shrimp silhouettes, each a different color and a different distance from the camera.

This proved that cuttlefish do have depth perception, just like humans. In some cases they would get so close to the video shrimp that their tentacles were hitting the screen itself. 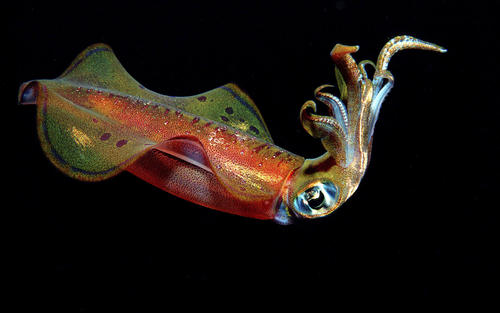 "I was ecstatic. We were sort of jumping up and down," Wardill said. He also said that the cuttlefish would immediately get real shrimp as a reward. The study proved that the cuttlefish see in 3D, but not exactly the same way that humans do. Also, even though they have "fish" in their name, cuttlefish aren't really fish.

They are actually marine mollusks that are related to squid and octopuses, and are probably the world's most intelligent invertebrates. This makes them one of a kind, and also just plain cool.

"While cuttlefish have similar eyes to humans, their brains are significantly different," Paloma Gonzalez-Bellido, assistant professor at the University of Minnesota, said in a university press release. "We know that cuttlefish brains aren't like humans. They do not seem to have a single part of the brain — like our occipital lobe — dedicated to processing vision. Our research shows there must be an area in their brain that compares the images from a cuttlefish's left and right eye and computes their differences."